A heartfelt, American drama, The Help (2011) focuses on the civil rights era, a time filled with high tensions and emotions for so many people, white and black. 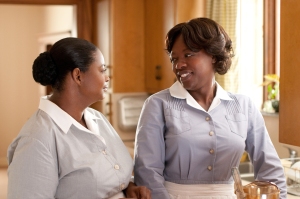 The Idea: Eugenia “Skeeter” Phelan (Emma Stone) is a young white woman who wants to make it in the world of writing, currently doing pieces as a small time journalist. She also stands apart from most of her white friends, in that she looks past skin color. With black woman working as maids, doing everything around white people’s homes, even raising their children, Skeeter sees the potential for a book that would go in to detail about the encounters of the maids and their treatment, considering all that they do. Skeeter is closest to two maids, Aibileen Clark (Viola Davis) and Minny Jackson (Octavia Spencer), who is Aibileen’s best friend. Convincing them to participate in interviews for Skeeter’s story isn’t easy, seeing as they fear being recognized in the book for who they really are. Skeeter must prove herself to be trustworthy, and show that she is willing to take the risks involved to do something that she feels is right. 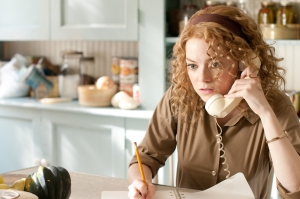 I came across this film not long ago by chance of it being on television late at night after my internet had gone out. Though I considered changing the channel a few times, I found myself “caught on” enough to see it through. Even though pesky commercials took away from some of the emotions tied to the movie, I still found it magnificent, for it’s setting and relation to history.

“The Help” reflects something that I don’t think a lot of similar movies do, in that it shows the hardships on both sides, black and white. There were white people that treated blacks well and knew that they were mistreated. But only a handful were willing to actually put themselves on the line for the sake of others, and many whites who had been kind to blacks, were pressured by friends or family to shun them, or treat them differently.

I love the point of views from nearly all angles that this movie features. It definitely expresses what life was once like, not so long ago, and reminds us just how far we have come in equality for all.

My rating: 90% I may not be a fan of history itself, but the movie is so interesting considering it’s based on history so close to us in time, and knowing that people we may know today, once lived in a world that seems so much different that the one we are in now.

Thanks for reading and the preview is attached below.