The Internship is a 2013 comedy focused on our fast paced, progressing technology and a company that is dominating in the tech industry, Google.

Billy McMahon (Vince Vaughn) and Nick Campbell (Owen Wilson) are two recently unemployed watch salesmen, who, now in need of jobs, are discovering that the job market is more complex than they thought. With more confidence than knowledge, they apply together for an internship at Google. During their first day with the company, all interns are instructed to get into groups that will compete over the summer for jobs. The winning group in the end would have themselves positions with Google. Billy and Nick aren’t popular among the younger generation interns, and are left with a group of outcasts. Together, this group of diverse interns must learn to work together to achieve the impossible.

Overlook: Well…There are things to love and things to hate about this film. In the end, I came to the conclusion that I did like the movie (I typically don’t write about movies I don’t like), but it wasn’t for the humor. That’s not to say it wasn’t funny, because it had it’s moments. Here are two guys that know nothing about the technology they are supposed to be working with, and their attempts to try to understand it were funny, but about as funny as a teenagers parents trying to figure out how their new smart phone or television works. Sum that up and I am saying that there are parts that are funny as well as parts that are irritating.

Pros: Google has been declared the best company to work for, several times in the past for it’s over all workplace culture and livened environment. Having seen several documentaries on the company, it was nice to watch a movie about it, with some fiction thrown in. This gives viewers a new perspective of not only the company, but where our world is headed in terms of technology and jobs. “The Internship” relates to the our modern day world and changing work force. Middle aged adults who have no experience with technology, just don’t have a chance at many of these “google like” companies, which is tragic, because how many of us really get to experience a workplace like that of the almighty Google? In other words, expectations of job applicants and interns are as high as they were depicted in the film. Technology is growing faster now than it ever has, and according to predictions, by 2020 there will be matched or exceeded carbon emissions from running our worlds computer servers than there is coming from the airline industry! What role will ill-qualified adults be able to play through all of this change? It’s these questions that “The Internship” brings to the table, and is precisely why I am fond of the movie.

Cons: Too much fiction makes for bad fiction. Bill and Nick would have never gotten past the interview phase with Google in real life, and from the one that they gave in the movie, I am left scratching my head as to how they were accepted, given their OBVIOUS lack of tech know how. Also, Vince Vaughn is a big name in the entertainment world, but at the same time he is a dart that only hits the bullseye on occasion, and this just wasn’t one of those times. I’ll admit, I was excited to see Owen Wilson and Vince Vaughn together in a movie because I like both of them, but particular portions of this film were just dry. 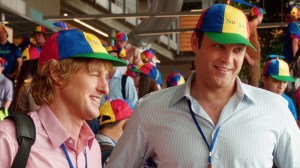 Total Abstract Review: 70% (rounded up) For capturing something real, but at the same time, leaving us with a partially “fake” plot and characters that could have been more entertaining.

Thanks for reading and enjoy the trailer below.