Hugh Jackman has played Wolverine for some time now and he continues to show us just how bad-ass he really is. In 2013’s “The Wolverine” he faces new challenges, and for the first time, actual death. 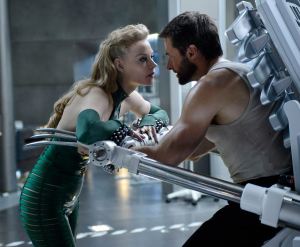 The story: In 1945 Logan (the Wolverine) saves a Japanese officer, Yashida, during an atomic bombing. Years later (present day) Logan is tracked down by another mutant, Yukio, who can see death coming for any person. Yukio’s finding of Logan is on the behalf of Yushio, who is now dying and wants to see Logan. Yushio offers Logan mortality, having the ability to pass Logan’s healing abilities (which Logan sees as a curse) to Yushio through advanced technology.

Evaluation: Just as I saw a big change in the last James Bond film as opposed to previous ones, I found a big change here as well. First, Logan was a typical, immortal mutant, then he was enhanced through technology, turning his claws into adamantium knives and his skeleton into an indestructible masterpiece. Now we get to see him actually face death as he suffers through a mortality change.

This change in course, or major twist in Logan’s life makes this movie extremely interesting. On one hand I know him to be immortal and indestructible, and despise seeing him in such harsh conditions that make him appear so weak. But on the other hand, this may just be his biggest challenge yet, trying to save himself as a partially mortal man.

Total Abstract Rating: 90% “The Wolverine” has a strong, intense plot, with a major twist of mortality this time.

Thank you for reading.