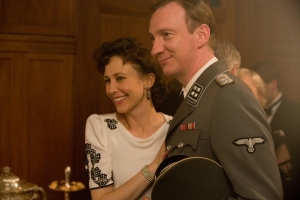 The story: In what seems like an instant, the life of a young boy named Bruno (Asa Butterfield), takes a big turn when his father, Ralf (David Thewlis), is promoted to SS-Obersturmbannführer Commandant. Ralf and his family relocate, and settle down in a home that is too close for comfort to an extermination camp, little does the rest of family know. That is until Bruno, who is bored senseless after being taken away from his friends, decides to explore in the back garden, where he has been forbidden to go. He finds the camp, but doesn’t know what it really is, and takes it for a farm. Here he meets another boy, Shmuel, who is the same age as Bruno. The two become friends who interact with a wired fence between them. But the grass is always greener on the other side right? Bruno wants to go into the camp (or “farm”), where as Shmuel would probably love to get out, along with his family.

Evaluation: I have seen several movies based on this time period, some of which are from the perspective of the Jews living in the camps. Both interesting and sad most of these movies are, and “The Boy in the Striped Pajamas” is different, but in many ways the same. We can still catch a taste of the horror that took place, but this time we see things from a child’s view point. Bruno doesn’t fully understand the time he is living in, and see’s his new friend as an equal human being. This kind of compassion lightens the gloomy WWII mood, but doesn’t change the inevitable, and ultimately decisions are made, and a sad ending is what we are left with.

Total Abstract Rating: 85% I love the setting, the view point of the film, the connection to history, and the emotion tied to the movie, especially in the very end.