Ride Along (2014) has some action, some funny, some arguing, some shooting, some video games, and more, but how well was it all incorporated?

Ben Barber (Kevin Hart) is a high school security guard who has an Xbox and a hot wife, and wants nothing more than to be a police officer. Putting a damper on his hopes and dreams is his wife’s brother, James Payton (Ice Cube), who is a hardcore, badass cop, that doesn’t exactly play by the rules. After Ben learns that he’s been accepted into the police academy, he’s relentless in trying to contact James to notify him of the news, in an effort to earn his approval. James isn’t impressed, and is convinced that Ben would be a terrible cop and is already a disaster of a match for his sister. The boys talk it out, and James eventually offers Ben a “ride along” to spend the day in the life of a cop. If Ben can prove to James in one day, that he has what it takes, then James will give his approval for Ben to be with his sister. 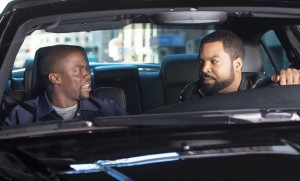 Let’s start with the cast. Kevin Hart, is as we know, a pretty funny guy, and Ice Cube is a strong actor. The blend of their two on screen personalities is an excellent combination if you ask me. It’s that classic, one serious guy and one silly guy, type of plot. It’s difficult to imagine who could have replaced Ice Cube, because I feel he was perfect for his role, and even though I’m a Kevin Hart fan, I believe any comedic actor could have pulled his role off, even with his own unique take on it.

The beginning of movie was briefly action packed and gave us a good sense of what kind of cop Payton really was, and just how seriously he took the job. We then got a glimpse of Barber’s lifestyle, from online console gaming, to his smoking hot wife, and his dull day job as a security guard. The movie does well in expressing the two completely different lifestyles, and over all the plot itself was well structured and entertaining. Unfortunately though, it is a comedy, and we have certain expectations as viewers going into comedies…It needs to be funny!

As with many movies, I think that some of the best parts were captured in the movies trailer (WHICH I HATE). Once you’ve seen the joke in the trailer, you’re already expecting it, and it’s much less funny in the actual movie. I can’t say there weren’t some good parts that had me going, but I was disappointed in this area of evaluation.

Total Abstract Rating: 80% I like the plot and the interactions between the two guys, but it could have been funnier.