With an interestingly chilling legend of the past, the Yankee Pedlar Inn should be a decent hotspot for ghost hunters, but instead it’s practically abandoned and about to close…no better time than now to make some noise! 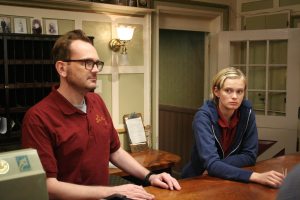 Claire (Sara Paxton) and Luke (Pat Healy) are the only two employees working during the Yankee Pedlar Inn’s last weekend of business. Clearly suffering from lack of business, the old hotel is out dated and can’t stack up to the competition. It does however, come with some ghost stories. The greatest one is of Madeline O’Malley, who supposedly hung herself in the 1800’s after her new husband ditched her on their honeymoon. Her body, as legend has it, is in the hotel’s basement, where the original owners put her. Both having an avid interest in ghost tales, Claire and Luke use modern(ish) equipment to listen for and find evidence of ghosts residing in the hotel. Fun? SURE! Good idea? Well… 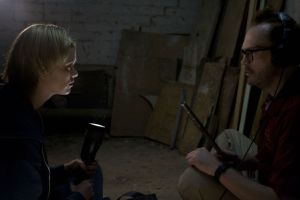 I may like many horror movies, but I do have trouble finding ones that are actually scary. What I like about this one, is that even though it comes with a practically predictable plot (a PPP…yes I made that up) it still maintains that true horror film vibe that has you checking over your shoulder every so often just to make sure you are in fact alone. My favorite scene, and the strongest scene for that matter, which validates my thinking, was when Clair and Luke are in the hotel basement and they sit down to try to speak with a ghost. After a moment of nothing, Clair develops a stare that extends just beyond Luke, who is siting across from her. I don’t remember the conversation exactly but Claire eventually says, “She’s right behind you.” It’s the fact that Claire is facing Luke and us (or the camera) when she says it. Luke’s reaction is nothing short of how a small scared child would react, and in an analogy, pours water on the flames of the scene. So it’s slightly ruined by an almost comedic reaction from Luke, but was still eerie enough to form a lasting impression on me. 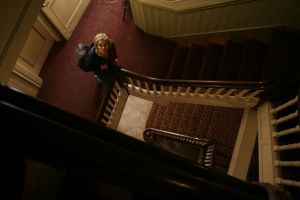 I also find myself trying to connect with the characters a little too much. I’m basically saying that the movie placed a small partition between me and the characters but I found it quite simple to overcome. I only wish connecting with them was as automatic as my wifi settings. Either way, I was able to mentally step into their shoes and bask in the greatness of having an entire hotel at my disposal to satisfy my ghost hunting desires. This I am very much a fan of.

Total Abstract Rating: 85% Not the most terrifying movie I’ve ever seen, but I did enjoy it and I think most movie viewers will too!